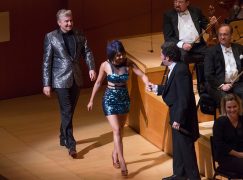 Here are the plans, just announced, for the Los Angeles Philharmonic Orchestra’s centennial. Watch out also for a world premiere of Steve Reich’s Music for Ensemble and Orchestra, conducted by Susanna Mälkki.

– 20 programs conducted by Dudamel, ranging from the world premiere of John Adams’ piano concerto with Yuja Wang as soloist to a climactic performance of Mahler‘s monumental “Symphony of a Thousand” in its Walt Disney Concert Hall premiere

– Programs celebrating the relationship between movies and music, pairing the orchestra with screenings of excerpts from Stanley Kubrick’s masterpieces and a celebration of scores by John Williams

Gustavo Dudamel said: “I have been thrilled to help define and shape the LA Phil over the past decade of our great history, when we have worked with such enthusiasm to make ourselves more diverse, more inclusive, and more engaged with our community, while pushing ourselves every day to make music that is magnificent and courageous. This Centennial season, which focuses so strongly on artistic breakthroughs and inspired educational projects, such as our new YOLA center, is going to carry us forward with new momentum.”

Simon Woods said: “The LA Phil has earned the reputation of being the orchestra that dares to do more, whether it’s for the diverse range of today’s composers or for the fast-changing communities that we work within and serve. As I look ahead toward this Centennial season, I feel that Gustavo and the artistic team have not just stood by the wager they’ve made on boldness and innovation but have doubled down on it. LA Phil 100 is indeed a celebration of everything that has led us to this moment – but, more importantly, it is a new beginning for wonderful things to come for this great orchestra and those who are inspired by its music making.”

« A new cellist for veteran US quartet