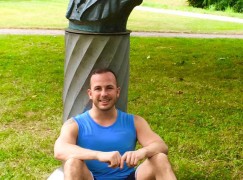 Just in: Yannick goes to Israel

The Philadelphia Orchestra has just announced what will be only its second trip to Israel.

Its conductor will enjoy Tel Aviv. He has the perfect wardrobe.

Following a highly successful 2015 European tour, Nézet-Séguin and the Orchestra will return to the continent, bringing the renowned “Philadelphia Sound” to devoted fans in important musical cities, including debut performances at the Jean Nouvel-designed Philharmonie de Paris and the Herzog & de Meuron-designed Elbphilharmonie in Hamburg. Other cities on the tour include Brussels, Luxembourg City, Düsseldorf, and Vienna. From there, the Orchestra will travel to Israel for performances in Haifa (Philadelphia Orchestra debut), Tel Aviv, and Jerusalem. Pianists Hélène Grimaud and Jean-Yves Thibaudet will join the Orchestra as soloists.

“To have this remarkable opportunity to travel to Israel with the extraordinary Philadelphia Orchestra is a dream come true,” said Nézet-Séguin, who will make his first visit to Israel on this tour. “I also look forward to returning to Europe, where classical music is so deeply admired, and where we will bring our distinctive sound to some of the world’s most esteemed concert halls. It is incredibly fulfilling to represent our Philadelphia community abroad as cultural ambassadors. We look forward to bringing the spirit of our hometown audiences with us on our journey, as we share our magnificent music-making with those around the globe.”

Death of a pathbreaking Italian conductor, 58 »