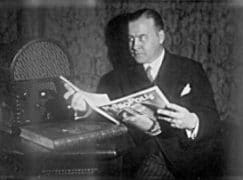 We have read in the Entartete Musik literature that at least 100 composers left Berlin in 1933, the year Hitler came to power. You will search in vain for the name of Gottfried Huppertz, composer of music for two of the great silent films, Die Niebelungen and Metropolis.

The Metropolis director Fritz Lang left Berlin for Paris after Goebbels banned The Testament of Dr Mabuse. But his composer stayed on at the UFA studios, hoping things would blow over.

All we know beyond that is that he died in Berlin in February 1937 of a heart attack, aged 49. What happened to Huppertz after Fritz Lang and most of his other film pals left? And was the heart attack brought on by political stress?

A terrific new recording of his complete music for Metropolis makes this question suddenly pertinent. Huppertz was a widely read by not a particularly original composer. His score betrays influences of Weill, Eisler, Schreker and even Hindemith. It is vivid, frenetic and incredibly listenable (the CD is out this month on Pan Classics).

Did Huppertz lose work under the Nazis because of his Weimarish style? Did he try to leave Berlin? Seriously, does anyone know what happened to Gottfried Huppertz?