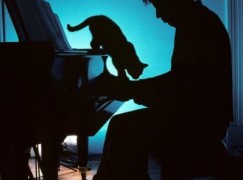 Was this Philip Glass’s response to Gruppen?

Paul Pelkonen has attended the first New York performance in 38 years of Music With Changing Parts.

This was the New York premiere of the revised version of Mr. Glass’ score, a work that was written  five years before Glass and Robert Wilson detonated Einstein on the Beach. It stands alone in the vast Glass catalogue. Its uniqueness is in that it allows its performers some leeway for improvisation, and its length in performance can range between sixty and ninety minutes. (Friday night’s performance ran just over an hour and a half.)

Although there was room for improvisation, the three groups onstage (the Philip Glass Ensemble, the San Francisco Girls’ Chorus and students from the San Fransisco Conservatory of Music) were still confined to the trademark Glass technique of small melodic cells, built rapidly atop each other to generate its vast structure. The technique results in something with the size and weight of Stonehenge, if that monument were made from grains of sand….

« A winter music festival keeps it all uneasily in the family

Opera is cancelled due to substances in the set »