The Met announced today that Yannick Nézet-Seguin will become music director in September, two years earlier than anticipated, for reasons that are overly familiar.

Peter Gelb also said that his position would be funded with a $15 million gift from the Philadelphia-based Neubauer Family Foundation, led by Joseph and Jeanette Lerman-Neubauer.

The Philadelphia Orchestra sees this as the start of a long partnership with the Met, writes Peter Dobrin. 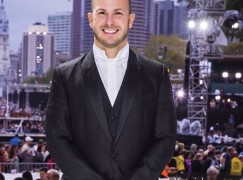