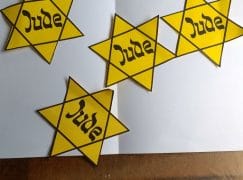 In the first act of The Banality of Love by Ella Milch-Sheriff, a world premiere at Regensburg Opera, the audience is showered with yellow stars in the opening act.

One the opening night, some people walked out.

My own reaction was mild amusement, not much more.

The opera recounts the affair between the brilliant philosopher Martin Heidegger, who became an avid Nazi, and his Jewish student Hannah Arendt.

Were the stars inappropriate? I am still in two minds.

More about the opera itself before long.