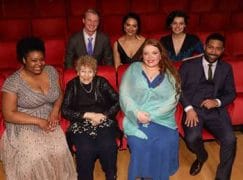 The 2018 awards for US and Canadian singers have just concluded.

The big winners are: