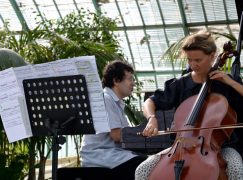 On BBC Radio 4 this morning, Chi-chi Nwanoku thanked Slipped Disc for help towards the recovery of her double-bass bow, which she had left on the London Underground.

Tonight, we hear that Ophélie Gaillard, whose Gofriller cello was taken from her at knifepoint on Thursday, has been reunited with the instrument.

Apparently, it was left close to her house in a battered stolen car.

She received an anonymous call and was told to look outside.

« A lost composer of the Soviet Union

What Kaufmann will sing at Covent Garden next season »