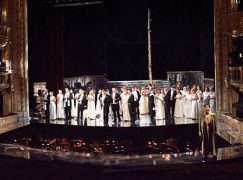 Opera is cancelled due to substances in the set

Friday night’s performance of Rimsky-Korsakov’s Sadko at the Slovak National Opera was called off at the last minute with no explanation offered to the audience.

But these things tend to leak out.

Apparently, singers complained of mould growing over parts of the set.

Health-and-safety were called in. Samples were taken and sent to the lab. Results will take a few days to arrive.

Meantime, speculation is rife. It could be any of these:

« Was this Philip Glass’s response to Gruppen?

A lost Donizetti opera comes up for air »