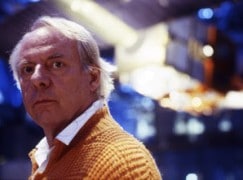 The London Symphony Orchestra [LSO] today announced full details of its performances of Karlheinz Stockhausen’s orchestral masterpiece Gruppen which will take place at 16.30 and 18.15 on Saturday 30 June 2018 in Tate Modern’s Turbine Hall. The announcement comes as Sir Simon Rattle’s second season as LSO Music Director, which runs from September 2018 to June 2019 at the Barbican, goes on sale.

Gruppen requires three separate orchestras playing simultaneously, each with its own conductor. 109 LSO musicians will be split into three groups in the Turbine Hall, conducted by Simon Rattle, Matthias Pintscher and Duncan Ward. The audience will be right in the middle of the performance space, enveloped by the sound and encouraged to move around as the work is performed. BBC Radio 3 will record the performances in binaural sound for broadcast later the same evening, allowing listeners on headphones to recreate the aural experience of being in the Turbine Hall.

The LSO and Simon Rattle will also perform Et exspecto resurrectionem mortuorum (And I await the resurrection of the dead), written by French composer Olivier Messiaen to commemorate the fallen in both World Wars.

Both works were inspired by the vast scale of the Alpine mountains surrounding each composer as he worked, Stockhausen in Switzerland and Messiaen in south-eastern France, and both are well-suited for performance in non-traditional venues like the Turbine Hall.

A true landmark in the history of music, Gruppen treated the construction and performance of music in a completely different way, challenging both performers and audiences. Its title refers to 174 ‘groups’ of which the work is comprised – cohesive groupings of musical notes which are not brought together because of their pitch (like a traditional chord), but share a particular characteristic, such as speed, or richness of colour or dynamics. The world premiere took place at a concert in Cologne in 1957 in the Kölner Messe, an international trade fair and conference centre, conducted by three of the most significant avant-garde musicians of the day: Stockhausen himself, Pierre Boulez and Bruno Maderna.

This is the first UK performance of Gruppen not to take place in a concert hall or other venue traditionally associated with classical music. Gruppen has been performed nine times in the UK since it’s British premiere in Glasgow in 1961. The Turbine Hall – a huge industrial space at the heart of Tate Modern – has been used for a wide variety of performances and events since the gallery first opened in 2000, from Kraftwerk’s eight-day retrospective of concerts to Michael Clark Company’s spectacular residencies.

Stockhausen at Tate Modern is produced by the London Symphony Orchestra, in association with Tate Modern. There will be two performances on Saturday 30 June, at 16.30 and 18.15. Tickets go on sale in April. For full details please visit: lso.co.uk/tate

« It’s a Russian win at the Singapore violin competition