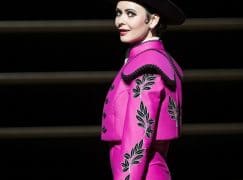 After all the hype for Covent Garden’s new Carmen, the morning-after reviews are decidedly mixed.

David Gutman in The Stage calls it a ‘heartless, sometimes brilliantly theatrical, staging.’ He adds: ‘Carmen retains an androgynous look until the final scene imprisons her in a florid gown.’

Mark Valencia in What’s On Stage condemns Kosky’s ‘215-minute vanity project’. He writes: ‘Neither does it give me any pleasure to lament the Royal Opera’s questionable casting for its new flagship production. Anna Goryachova has an attractive, full-bodied mezzo but her Carmen was indecipherable and her intonation wayward. However, it is not her fault that the production’s antics allow for zero sexual chemistry with Francesco Meli.’

David Nice in theartsdesk.com: ‘Part of the problem in this first-cast airing of Kosky’s show at the Royal Opera – it was first seen in Frankfurt in 2016 – is a dramatically weak Don José. Francesco Meli’s is a strenuous, unhoneyed tenor voice: good, at least, for the more brutish later stages. As a character, this José is grim and wooden. Kosky isn’t interested in making him sympathetic. Yes, we know from Merimée’s novella that the Basque outsider has a violent history by the time of his fatal meeting with Carmen in Seville. Should that make him a cold psychopath, though, totally unresponsive to Micaëla, the girl who brings him news of his mother?’

UPDATE: First of the national newspapers –

Rupert Christiansen writes in the Telegraph: One great virtue of Barrie Kosky’s new staging, imported from Frankfurt, is that it has shaken my complacency – it is certainly different. But being different is not quite enough, and I felt increasingly dissatisfied as the evening progressed….

There is much musical material, excised from the standard editions, that I hadn’t previously heard – notably another entrance aria for Carmen, a comic aria for Moralès, and a much longer duet for José and Micaela. Some of this is delightful, some better left in the library. The spoken dialogue is replaced by an off-stage narration, using French text mostly drawn from the opera’s source in Mérimée’s novella. It’s all electrically alive, fresh, witty, energised and provocative.

Gradually, however, as so often with Kosky’s work, it loses steam: the first two acts last nearly two hours, and there is less new music to keep one alert.

Tim Ashley in the Guardian:Barrie Kosky’s new Royal Opera production of Carmen hails from Frankfurt, where it was first seen in June last year. It’s a curious staging, shot through with flashes of brilliance, though by no means cohering into a musical or dramatic whole.

As one might expect, Kosky aspires to postmodern radicalism. He has largely dispensed with Spain, apart from a few flounced frocks and matador uniforms. Don’t expect a tobacco factory or cigarette girls smoking, or indeed anything that smacks of particularly French naturalism.

Richard Morrison in the Times: There’s a disconcerting dichotomy in Kosky’s concept, however. While Goryachova’s Carmen and Kostas Smoriginas’s caricature glamour boy Escamillo are clearly meta-theatrical figures — ironic characters who know they are play-acting — it’s evident that Francesco Meli’s Don José and Kristina Mkhitaryan’s Micaëla come from the conventional operatic world of ardent passions and pathos. Kosky attempts to make drama out of the clash between the styles, but it’s not always convincing.