Jonas Kaufmann: How I fell out with the Met

More revelations from my interview with the German tenor in today’s Spectator:

Kaufmann makes no secret of his discomfort with New York’s Metropolitan Opera. ‘The productions have not always been that great. The HD [cinema screenings] are a big success but many people don’t see the need to go to the show in New York any more. These people are not going to come back. The Met can’t even sell out a Tosca.’ When Kaufmann, missing his children in Munich, tried to shorten his run in the Met’s ill-starred Tosca, he was ‘disturbed’ to read in the New York Times that he had cancelled. ‘It was not a cancellation from my side. I asked for a reduced rehearsal period and fewer performances. But they wanted all or nothing,’ he explains. He hates to be seen as a shirker…. 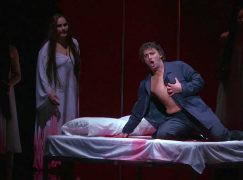 Kaufmann in Parsifal at the Met