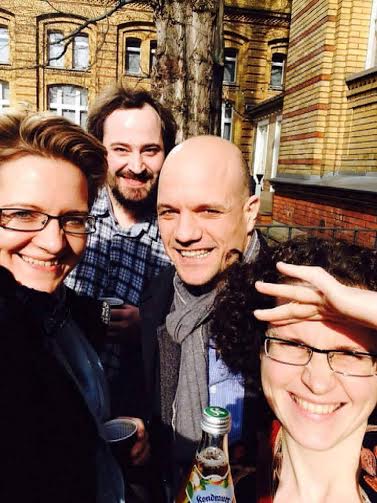 How do you get to be this good?

I dropped in to the Wigmore Hall on a filthy night this week to hear the Berlin-based Artemis Quartet, my first experience of them since their change in formation. They played Mozart, Bartók and Mendelssohn at a pace and precision the composers could never have imagined, impressive in the two classics, utterly riveting in the night noises and mood swings of Bartók’s second quartet.

Two thoughts ran all night through my head: nobody has a right to be this good, and – how the hell do they do it?

Happily, their second violinist Anthea Kreston, was thinking along the same lines for this week’s diary. Heaven alone knows where she found the time. The answer to my question can be found in the third paragraph.

It’s 34 minutes until curtains up in SW Germany – we are in the midst of a heavy touring period now. Last night was at Wigmore – it is wonderful to return to places enough times that you have found a favorite spot to get a post-concert pint, or you can greet the back-stage staff by name.

Arriving back at the hotel around 1 am, I had a fitful couple of hours sleep before heading out the door at 5 am for my flight to Frankfurt, and onto a series of trains to Kaiserslautern, a town in southwest Germany, affectionately known as K-town by the substantial amount of American military personelle living in a series of bases here. This is the largest (over 50,000) concentration of American military outside of the USA, initially built up in the 1950’s – army and air force – the biggest American hospital on foreign soil, many schools, sports teams, country and rock shows, and a huge mall with the likes of TGI Friday to Chili’s, movie theaters and bowling spread out over a series of small towns in the region. Security is tight at the bases – I was thinking of going over to take a peek, but I wouldn’t be able to get in without a sponsor and background check.

Last night, when I got to the hall for our traditional 1.5 hours of intense rehearsal before the concert (we do this every concert, even if we are playing the same program night after night – a chance to tune some spots, do a post-mortem on the night before, set lights and staging, tweak any microphones for recordings), I has a sinking feeling. As we headed out to stage, I glanced at a program, and realized with a slight panic that I thought we were playing two Mozarts and a Bartok – but actually Mendelssohn was on the docket. With a feigned casual – “see you on stage in a second”, I quickly blue-toothed my phone and iPad (from which I read my music these days), and tried to download a copy from IMSLP, without anyone noticing.

But of course there was a signal blocker in the hall – I quickly got the password for the Wigmore office WiFi, and as we were touching spots on-stage, I was calmly (or at least I was trying to look as cool as a cucumber) bouncing back and forth between phone/email/download/import. It became obvious what I was doing, of course, and a controlled but clearly concerned series of questions – what will you do about bowings and fingerings – all of your markings, began to dribble out. “I’ve got this – no worries!”, I said, to clearly disbelieving eyes.

But – all was well. It was actually quite a lot of fun – it freed me from looking at my part, gave me some fresh ideas and the ability to react more quickly to others. The audience seemed to like it as well – that normally well-behaved audience was “whoop-whooping” it up at the end of the performance.

As I look to the next weeks – I am already totally exhausted – this week is Berlin, London, K-town, Munch, Dortmund, then to Haifa, Tel Aviv and Jerusalem before I write my next entry. I will have 14 hours at home this week, and in that time, a quick laundry turn-around, family time, and double checking my repertoire!

I am already home-sick and miss my family – we have a new idea, though. We have a mama and daughter book club – twin sets of books that we will read and talk about on FaceTime while I am gone. It is hard to be away so much, but I know everyone back home in Berlin is in good hands.

« Abu Dhabi shuts down its orchestra