Gary Graffman: I did not allow Lang Lang to enter competitions

The former head of Curtis talks to Zsolt Bognar about how to run a music school that nurtures individual talent.

Gary, 90 this year, understands talent from the inside. He was a formidable pianist until a hand injury put paid to his concert career. More than anyone else, he was responsible for the emergence of the young Lang Lang.

‘I was totally against competitions,’ he says. ‘I didn’t allow Lang Lang or Yuja Wang to compete.’ 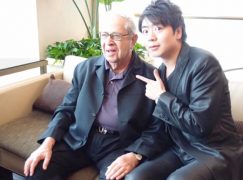