Fraud alert: Fake strings are being sold on Amazon

Contributors to the Mandolin Cafe website are reporting that amazon.com is selling amazon is selling counterfeit D’Addario Strings, which are made in China.

D’Addario, which is based in New York, makes guitar, mandolin, banjo and violin family strings.

D’Addario have complained to amazon.com about the fakes but have received no resolution. Meantime, people buying strings on Amazon are received duds.

I had ordered a 3 pack of EJ16 guitar strings, and unlike the packaging from my last string order, this time it was three sets of EJ16s in three cardboard packages, within a shrink-wrapped envelope. And proudly on the front of the shrink wrap is a sticker proclaiming the strings as “Made In China.” And, in the lower right hand of the cardboard packaging, it states “USA MADE.”

Called Amazon, they’re sending replacements. Spoke with George at D’Addario, and he was apologetic and frustrated. I am not the first person to have had this problem with Amazon selling counterfeit strings. 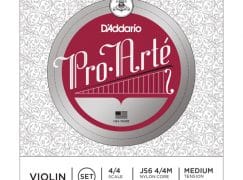