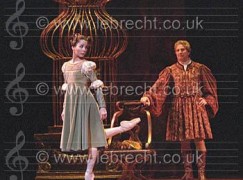 Fear and loathing at London ballet

The turmoil at Tamara Rojo’s English National Ballet is documented in a fresh report, out today:

We talked to twelve ENB dancers past and present, as well as support staff, and had sight of relevant documents. And the answer we consistently got was “fear.”

“I’ve been wanting to talk about this for so long, but was so afraid,” said one.

It is hard to comprehend, let alone describe, the palpable sense of fear common to the sources we approached on a strictly confidential basis.

Think about it: fear, all-pervasive and paralysing… in a publicly subsidised company… in 21st century Britain…

Equally striking was the eagerness with which accounts that had been churning inside came pouring out once people had been assured of absolute confidentiality. Striking too, that as they spoke to Ballet Position and relived their time at ENB, many of those who are no longer there still broke down and cried.

“I was so depressed, I still cry remembering it,” said one former dancer.