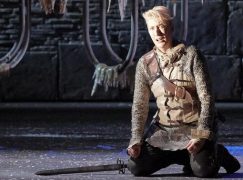 Handel’s Ariodante has never been done before at the Vienna Opera, so it makes sense that most of the singers are either on debut or role debut in Sir David McVicar’s production.

Dame Sarah Connolly sings the title role, her first in the house.

Wilhelm Schwinghammer is on debut as King.

When did you last hear a mandolin concerto? »