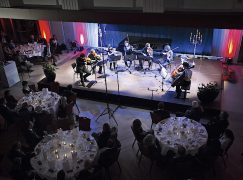 A winter music festival keeps it all uneasily in the family

Rumbles of discontent have reached us from Festival Next Generation in Bad Ragaz, Switzerland.

The festival is run by Drazen Domjanic of Liechtenstein, who is also founder of its resident orchestra, the Ensemble Esperanza.

So far, so music biz.

But the players were unhappy to discover that the artist in residence is none other than Sara Domjanic, the founder’s daughter. She gets to play the Mendelssohn violin concerto, the Piazzolla Four Seasons and Sarasate’s Carmen Fantasy, as well as leading the Mendelssohn Octet and other chamber works.

The festival, to its credit, introduces other young artists as well, but none gets the prominence of Ms Domjanic.

One ensemble player tells Slipped Disc: ‘Many of us young musicians in the orchestra feel betrayed, as the idea of the orchestra is not to accompany exclusively the daughter of our director.’

Was this Philip Glass’s response to Gruppen? »