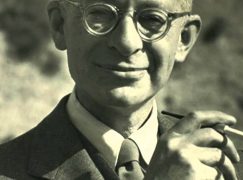 A Hollywood composer who vanished in the haze

It’s the 50th anniversary next month of the death of Mario Castelnuovo-Tedesco, an Italian-Jewish composer who fled Fascism in 1939 and wound up writing film scores for Hollywood and concert pieces for Heifetz.

He was the principal teacher of Andre Previn and John Williams and a major influence on Henry Mancini, Jerry Goldsmith and more.

Yet, since his death in March 1968, Castelnuovo-Tedesco has been largely forgotten, his works absent from the concert hall and rarely recorded.

Happily, a new website launched this week to remedy the oblivion. Check it out here.