William Fox has been appointed Sub Organist from July 2018.

James Orford has been appointed William and Irene Miller Organ Scholar from January 2018.

Nicholas Freestone has been appointed Acting Sub Organist from January-July 2018.

William Fox is currently the Organ Scholar of Magdalen College, Oxford, where he is completing an undergraduate degree in Music. Before going to Oxford, he held Organ Scholarships at Hereford Cathedral for his gap year, and at Wells Cathedral for the duration of his sixth-form, also holding a Government-funded Music Scholarship at the Specialist Music School there. William was such a strong candidate that it was felt worth waiting until the summer in order for him to fill the position. 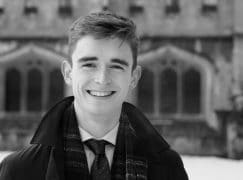 James Orford is currently in his third year of undergraduate study at the Royal Academy of Music. He has won numerous scholarships, organ prizes and piano accompaniment prizes whilst at the RAM, and has performed Schumann’s Piano Concerto at Cadogan Hall. In addition to his studies, James is currently Organ Scholar at King’s College, London, a position that he will be able to hold concurrently with his duties at St Paul’s until the end of this academic year.

Nicholas Freestone is the current William and Irene Miller Organ Scholar of St Paul’s Cathedral. As an experienced colleague, it was a natural fit for Nicholas to hold the position of Acting Sub Organist until the arrival of William Fox in July 2018. Nicholas joined the Cathedral following two years at St Albans Cathedral, having previously held scholarships at Wells Cathedral and Tewkesbury Abbey.