The conductor Jonathan Govias has been informed that the Teresa Carreño Youth Orchestra is about to be disbanded. The TCYO is the second flagship orchestra of El Sistema, after the Simon Bolivar.

Some of its players will be merged into the Caracas youth orchestra.

It appears to be another sign that Sistema has fallen into disfavour with the Marxist regime. The Bolivar orchestra has been withdrawn from its summer tour of Europe. The conductor Gustavo Dudamel is now persona non grata. 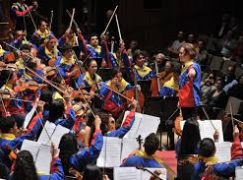