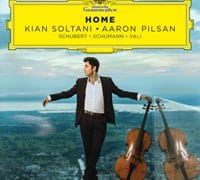 Not another young cellist….

We reported last week on the sudden profusion of cellist debuts on record.

Here’s one we forgot.

Born in 1992 to Iranian parents in the Austrian town of Bregenz, Kian Soltani is one of the most exciting cellists of his generation. “I’ve always felt at home in Austria”, he says. “And yet, the Persian side of my family gave me a chance to grow up with two cultures.” Bringing together Austro-German Romantic works and contemporary Iranian music, Soltani’s debut DG album, Home, expresses that sense of being rooted in a dual heritage. His pianist is Aaron Pilsan, whose background has parallels with Soltani’s. Home is due for release on 12 January, and Soltani and Pilsan will be performing some of its repertoire live at the Festspielhaus Baden-Baden and the Pierre Boulez Saal in Berlin early in the new year.

« Did you know there’s an EU conducting competition?

La Jolla loses both artistic directors at once »