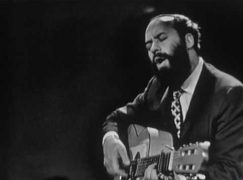 No grounds for new claims against the singing rabbi

Several women have accused Shlomo Carlebach, known as the Singing Rabbi, of what the Israeli media describe as sexual abuse. The rabbi, who made it his mission to return wayward youngsters to Orthodoxy, is said to have touched and kissed his accuser as teenagers. I am quite sure he did.

Carlebach’s methods were, at the very least, unorthodox. They did not, in my view, constitute abuse.

I knew Carlebach in the late 1960s when I was a student in Israel. He used to hang out with us on campus and I found him slightly creepy. He was 20-25 years older than us, unmarried and with no visible means of support or fixed accommodation. He spoke in a strong German accent and wore a tie, for heaven’s sake. But he toted a guitar and wrote truly inspirational melodies that quickly entered the Orthodox liturgy.

He was free with his hands and lips. He gave hugs and kisses. My liberated friends and I felt sorry for him that he probably couldn’t get laid due to his religious observance while the rest of us – this is the late 60s, remember – were having all the sex in the world.

And that was it. No suggestion, then or now, that he did anything more.

He was the gentlest of men. He never forced himself anyone as far as I could tell. Some of my female friends quite liked him, others kept their distance.

He did not, in any sense, abuse his authority as a rabbi – simply, because he had none. He was a wandering minstrel who was preaching a gospel, take it or leave it.

Nothing I remember of him comes under the category of abuse.  Hugging and kissing were not sexual offences at the time. The leading complaint against him is that he violated the Orthodox rule that men and women should not touch outside marriage. He certainly crossed that line, but he is not the only rabbi to have done so, then or since.

Now, however, he is caught up in a wave of #metoo outrage, so much so that his daughter, Neshama, has felt obliged to apologise for his alleged misdemeanours.

In the absence of any allegation that he forced himself sexually on an unwilling person, I am not prepared to regard Carlebach as an abuser of women. I have campaigned for half my life against sexual exploitation in the classical music industry, so I do not take any abuse claim lightly. Ever.

But I think lines have got blurred here. The complaints against Carlebach are not that he was a sexual aggressor, but that he failed to maintain Orthodox proprieties.

Which he did. Proudly, and so effectively that many owe him their adult sanity within the Jewish faith.

Carlebach was not Harvey Weinstein. I shall continue to sing his songs.

Keep your phones switched ON during concerts »