A blogpost from the great violinist:

We visited three leprosy colonies in the last two days. Leprosy, or Hansen’s Disease, is actually mostly a skin and nerve disorder caused by a bacteria Mycobacterium leprae. How many times was I asked if I got a vaccination before visiting? What an ignorant question.

We imagined that in the Villages, we would find persons who are mostly patients with visible aftermaths of disabilities and deformities caused by the bacteria, and therefore expected a kind of an open rural hospital/institution setting. On the contrary, while all of them were in completely destitute conditions: below poverty-line, severely-challenged living standards, we were welcomed by happy, energetic, smiling, and warm people, and the children in particular, receiving us with extraordinary openness.

From what we learned, there are some 800 leprosy colonies in India, of which we were able to visit three. The issue we face with leprosy colonies is a social one and not of a medical illness, and that of severe discrimination that afflicts multiple generations. At this point in time, in 2017, even though there are new cases of Hansen’s Disease reported every year, it is a completely curable disease only with a regimen of medication, and the likelihood of it being contagious to others is nearly non-existent. While its late symptoms may be frightening for some on-lookers, it is definitely not fatal. It is nonetheless somehow a disease that arouses extreme fear in society, that subjugates those who develop the symptoms (even when one has the bacteria, it is unlikely that the symptoms would develop, and in fact, if the symptoms were to develop to an extent visible on the outside of the body, that would mean that the disease would have been contracted as long as 10 years prior) to atrocious and unforgivable discrimination.

Historically and more recently, various governments and societies have handled the victims of Hansen’s Disease differently, but most with inexcusable, inhumane, and often barbaric methods and approaches, and some still continue their illogical ways, perpetuating the problem of social stigma. From what we experienced in the colonies we visited, fairly typical of those in West Bengal and in the rest of the region, we learned that the majority of those living in the villages actually never were patients and are mostly instead the second and third-generation families of a few former patients. Even then, the stigmata haunt them, often preventing rightful access to the most basic of the needs such as education, healthcare, the right to earn a living in dignified ways, and participation in society-at-large. This disables a break from a cycle of poverty because of marginalization. And while the actual number of new cases and of existing patients are very small by world-standards, it becomes a serious issue because of the wide-ranging problems and injustice stemming from it, extending it to persons around the actually those diagnosed with it.

How does the music feel when playing, especially when we are confronted head-on by the injustices of the society assaulting these villagers? There is no question that music can transport all of us. Music brings all of us a beautiful feeling. As we sense the children’s concentrated gaze, hear the birds chirping over our heads and cows and calves mooing along, while puppies are playing a tug-of-war, the music and the hearts also flow out and surround us. It was one of the most idyllic encounters with music for me. 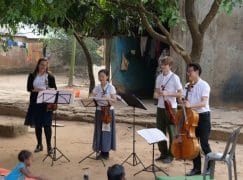