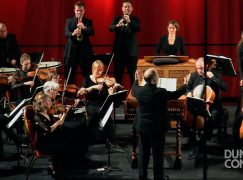 Creative Scotland has removed the Dunedin Consort from its list of Regularly Funded Organisations for 2018-21.

The Consort is internationally renowned. Here’s its statement:

As Scotland’s leading specialist period instrument ensemble, and the most decorated of any Scottish music company (with two Gramophone awards, a Grammy nomination and two Scottish Album of the Year nominations to our name), this comes as a significant disappointment. In the landscape of Scotland’s musical culture, no other organisation focuses on this vital area of the repertoire, uniting excellence in scholarship and performance to explore new ways of encouraging listener engagement. Dunedin Consort has achieved great success with very limited resources. Our artistic output, recognition in the industry and impact in the international and national music landscape in proportion to the level of funding and our turnover, cannot be matched by any other music company in Scotland.

Creative Scotland … funding currently accounts for 20% of our annual turnover (other music organisations receive 32-82%) representing exceptional value for public money and without it, Dunedin Consort will be forced to capitalise more on its opportunities elsewhere. This, in turn, will reduce the performance opportunities for our Scottish audiences and supporters, including the valuable outreach work we undertake in schools and with young performers. … Our national and international profile continues to develop – only yesterday we confirmed a further seven concerts in our residency at London’s Wigmore Hall, which sits alongside residencies at the Misteria Paschalia festival in Krakow and the Handel Halle Festpiele in Germany in 2018, and tours planned for Spain, France, Bolivia, Brazil, the USA and others over the next three years. Without support at home, this international impact – vital to Scotland’s reputation – must be at risk. What is certainly clear, is that the lack of Creative Scotland commitment will mean that it will not be possible to match this international demand with performances on home soil.

UPDATE2: As is the  Hebrides Ensemble, which performs contemporary music.

UPDATE3: Dunedin gets its funding back