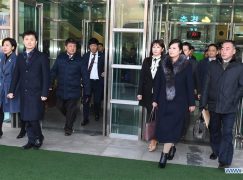 The Chinese news agency Xinhua has exclusive pictures of ‘an advance team’ from a North Korean orchestra that is due to combine with South Koreans at the Winer Olympics.

Caption: Hyon Song-wol (R), head of a delegation of the Democratic People’s Republic of Korea, arrives at the customs, immigration and quarantine office in Paju, South Korea, on Jan. 21, 2018. The DPRK sent an advance team of orchestra Sunday to South Korea for concerts during the South Korea-hosted Winter Olympics. (Xinhua/South Korean Unification Ministry)

UPDATE: Hyon Song-wol is the leader of Moranbong, a girl band.

« Sports relief as Vanessa-Mae bows out of Winter Olympics

Winter woes: Cleveland loses two singers and half a concert »