Is opera still suitable for teenagers?

An Economist correspondent wonders whether he took his 14 year-old daughter to the right show:

This week your correspondent took his 14-year-old daughter to watch an orgy. It was the opening scene of Verdi’s “Rigoletto”, in a rather explicit production directed by David MacVicar at the Royal Opera House in London. Had we been sat in the opera house itself, she would probably have seen only a faint blur of nudity in the distance. However, we were watching a live telecast at our local cinema, so she saw gigantic close-ups of quivering nipples and flexing buttocks. She thought it highly amusing. It was followed by three hours of licentiousness and blood—like “Game of Thrones”, but with a less credible plot. In other words, a typical night at the opera. What kind of a terrible dad would subject his children to this art form?… 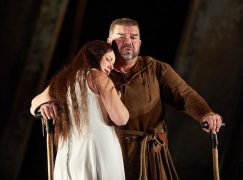