Is music in Germany as brilliant as reported?

The Financial Times, one of the last newspapers of genuine authority, has published a situation report by Richard Fairman under the headline, ‘Why Germany is classical music’s superpower’.

Fairman maintains that: ‘A glance around the international music scene in 2017 leaves little doubt that musical life in Germany has taken an unassailable lead and is only rising higher at a time when arts organisations in many countries are wrestling with dwindling financial support and audiences.’

He adds that the growth is even-handed, across east and west: ‘The unique strength of the orchestras from the east is that they preserved their traditional sound and style during the long years of isolation in the Soviet bloc when orchestras in many Western countries were starting to sound the same.’

1 Since 1989 Germany has abolished more than 40 orchestras, most of them in the east. That is more than the rest of Europe put together.

2 German conservatoires are packed with Chinese and Korean students on full scholarships because not enough young Germans want to make music their life.

3 Fairman points out that none of today’s leading German composers, all middle-aged men, can command an international audience. He omits to mention that most of the new composer prizewinners in Germany are women. And most are not German. 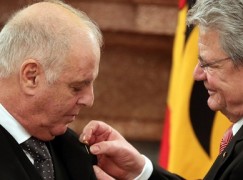 Where does that leave Germany’s musical future?