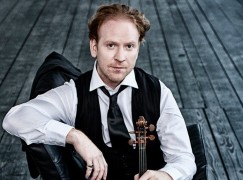 It always feels like a month has passed between my weekly writings and, as I start to write, it is as if I could pick from a fistful of events which have occurred in these past seven, long days. Last Friday I played a Quartet house concert (our third time at this wrap-around penthouse apartment/art gallery off of Kurfürstendamm) – our first run-through of a program which, at the time, seemed impossibly fresh, but now, six days later, falls quite neatly into the hands – my rests where I readjust my glasses are set, my waves of freedom and constriction becoming easily anticipated.

This house-concert was, as usual, packed to the gills with the “who’s-who” of Berlin – and again, I found myself thankful that I have a bubble of ignorance around me – after the concert I thought I heard mention of many celebrities present – from politics to media to music – and I was glad to be once again oblivious. But, as I checked my tuning for a final time, I couldn’t help but to recognize the silhouette of Daniel Hope’s seemingly perfectly but casually coiffed, muted carrot-colored hair – how many people in the world can be recognized by only the back of their head – no need for even a peek of a nose or turn of the lip? Later, in our green room, I was charmed by his relaxed nature, his attention to his little, wonderful family.

My guests this concert were my old dear friend from Curtis and her +1, RW2013 and his +1, and my german tutor Ramón, whose larger than life personality doesn’t even warrant a +1. How nice to look out and see my motley crew of friends, and to huddle with them after the concert over an incredible meal, on the rounded, red velvet couch, lit from above by a candle-lit chandelier.

Normally I wear, in concert, comfortable black slacks, a black top with some kind of style, and the same black flats I have worn for every concert for the past two years. Oh sure, I have worn the sparkly ball gown now and again, for those extraordinary occasions, but I prefer comfort over dazzle.

But that night, because it was a house concert, I donned my favorite dress – a tea-length vintage party dress from the 40’s – hand-made from a bold pattern of black, red and white chickens, with criss-cross fly-away built-in cape, and black velvet details. This dress was given to me back-stage, a number of years ago, by a loyal concert-goer. She came to introduce herself back-stage, saying she had heard me play several times, and that she was just going through a box of her mother’s things. She gave me the dress, with old drink stains on it, cigarette burns – a story within a dress – saying it was her mother’s favorite party dress, and she thought it would fit me perfectly. And it did – it is one of only a handful of items which made it into the suitcase for our move here, two years ago.

The next morning, Jason and I boarded a train to NW Germany for a duo concert – the girls well-in-hand with an overnight sitter. What fun it always is to travel with Jason – we shared a romantic picnic in the train, and as I listened to him perform his Bach Suite in the concert, I was awash in memories of these past 20 years – our meeting in the cafeteria in Aspen as students, all of the adventures we have shared. Playing the Kodaly Duo, I couldn’t even possibly remember how many times we have played together – we are like a matching pair of gloves.

Since that time, a concert in Brussels (accompanied by a private meal in a 17th century farmhouse), a concert in Paris – packed hall as usual, and a big, boisterous dinner after, with students (Hermès and Arod quartets, Sora Trio) and friends. There is nothing as fun as an inter-generational, post-concert meal. And to be the older, teacher part – an unexpected pleasure. I nipped back home for 19 hours, enough time to see my family, begin rehearsal for a piano trio concert with Jason and the incredible French pianist Amandine Savary, and now my plane is landing in Vienna, where we have two nights of back-to-back concerts in the beautiful Konzerthaus.

On Saturday I take an early flight to Munich to see my teachers, the Emerson Quartet, in concert with Kissin. And after, once again I will be at a long table, sharing stories and drinks with another inter-generational gathering of musicians, this time as a bright-eyed student. All in a week’s work!