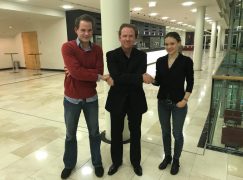 In a quiet news month, the Times – both of London and New York – alighted last week on the story of the violinist Daniel Hope reaching for his lawyer to take down a video shred of one of his performances.

The video maker, Arno Lücker, was fired from his duties at Berlin’s Konzaerhause despite deleting the video and making a private apology to Daniel Hope.

We went to the Philharmonie Essen, where Daniel Hope played tonight. After his concert we met him, we apologized and we made this nice pic together as a sign of respect! We all agreed to put this behind us and return to music.

That ought to be an end to the matter.

Sports relief as Vanessa-Mae bows out of Winter Olympics »