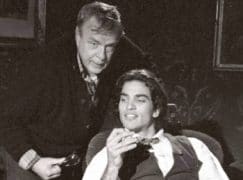 The actor Johnathon Schaech has written an account in People magazine of how the Italian director, who cast him in Storia di una capinera  (Sparrow) in 1992, came on to him while they were making the film. Schaech was 22 at the time, Zeffirelli around 60.

This is as bad as it got:

One night, I think it was when we were at a hotel in Sicily and my costar wasn’t there, he told me he was coming to my room. This time he had managed to get a key. I was in bed sleeping and he let himself into the bedroom and he got beside my bed and was over the top of me on the side of the bed as I awoke. He got in my face. There was a moment where I was telling him “No” and he told me, “We have to.” I remember his breath smelling of scotch. And this is the whole thing, and you hear it from the women who are opening up now about their own experiences with abuse: There’s a moment where, even though you are taught to be charming and have sex appeal as an actor, a line is crossed and everything changes. When someone crosses that line, when someone preys on you, there’s a panic that sets in. That’s what Franco did. He crossed that boundary and I felt as though I left my body. He molested me in my bed. He put his hands in places that I couldn’t even imagine and he did things that I am not proud of. But it’s not my fault. His pants never came off but I can [still] see him fumbling with his belt. He attempted to give me oral sex. I just remember being like, “God, please no. I’m OK, I’m OK.” I did nothing. I just lay there in bed. It felt like four hours but it was probably like 30 seconds.

« Houston Symphony, we have upgrade

End of a concertmaster dynasty in Munich »