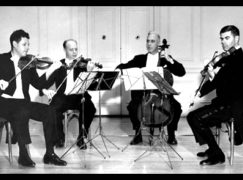 The violinist Robert Mann, founder of the Juilliard String Quartet in 1946 (with Robert Koff, Raphael Hillyer and Arthur Winograd) and its first violin until his retirement in 1997, died on New Year’s Day.

The quartet gave 6,000 recitals, made many recordings and premiered 100 new works. Mann, who hailed from Portland, Oregon, also had an independent recording career. Among other milestones, he recorded the Bartok solo sonata, as well as the complete Beethoven violin-piano sonatas with the British pianist Stephen Hough.

Above all else, Mann was a teacher at Juilliard and a mentor to innumerable new quartets, including the Alexander, Emerson, Concord, New World, Mendelssohn and St Lawrence.

Stephen Hough tweets:  ‘I learned as much from him as from anyone else in my life. I saw him last month: he was unable to speak, barely able to move, but gave me a smile which I’ll never forget.’