When a mouse was seen during a concert at London’s Barbican Hall in November, audience members shrugged and said, ‘oh, not again!’

In Washington, apparently, they are not used to such things. There were ‘a few squeals and much commotion’ when the little rodent ‘raced up and down the aisle in the Kennedy Center’s Concert Hall’ during Yutaka Sado’s debut with the National Symphony Orchestra. 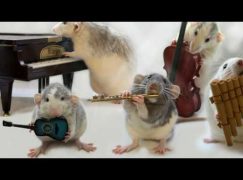