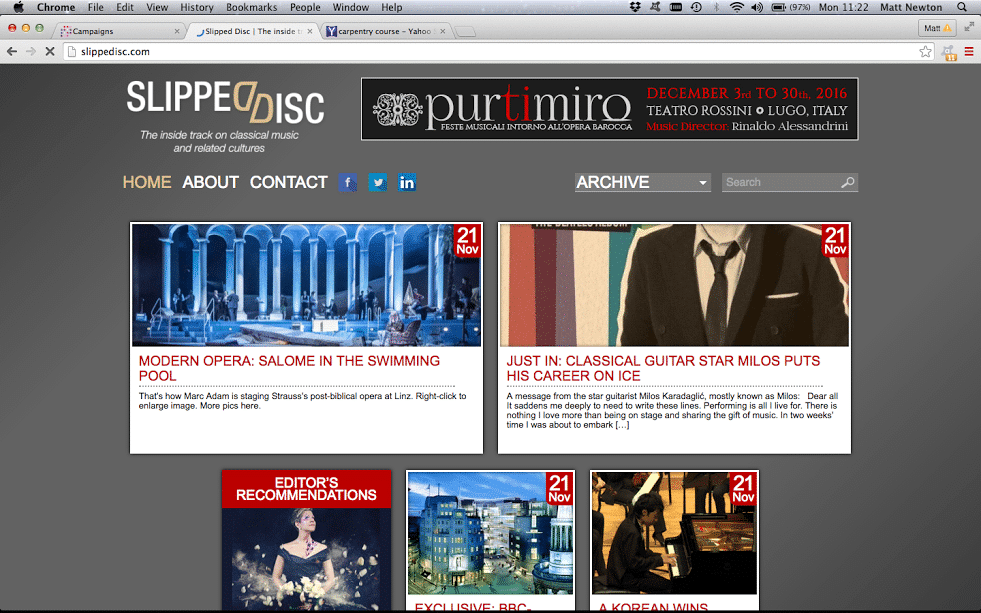 When our enemies see the light

Just in from Bob Shingleton’s On An Overgrown Path:

Whether we like it or not, Norman Lebrecht’s Slipped Disc blog is an accurate measure of the pulse of the classical industry, because it receives the unqualified support of musicians, record labels and orchestras. At the time of writing sixteen of the twenty most recent Slipped Disc posts are about classical celebrities, while three of the others are updates on long-running celebrity-related scandals. Which means that using this measure classical music’s priority is 95% celebrities and their dalliances. There was not one story about the setting of the music; not one story is about the physical, virtual, or social environments in which the music is heard.

This must be the first kind word Bob Shingleton has ever had to say about Slipped Disc and, while it is gratefully received in the spirit of the season, it would be remiss on our part not to indicate its statistical shortcomings.

These are the stats.

Slipped Disc is on course to reach 1.5 million readers this month.

Google Analytics tells us pretty much who and where they are.

That means 61 percent of Slipped Disc readers are below the age of 35.

That is hardly the ‘the incestuous closed loop at the centre of the classical music industry’ that Shingleton claims. It is a very different readership from the classical preset and one that is very engaged and interactive. What is more, it is growing not just from outside the classical music community but from beyond Facebook and the rest of social media.

These are new demographic horizons and we are excited to explore them. We wish On An Overgrown Path success in its own efforts to reach new readerships.

« How to make peace between Lang Lang and Yundi