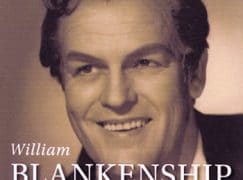 The death has been announced by the Vienna State Opera of the tenor William Blankenship, a member of the company from 1967 to 1969.

William Leonard Blankenship came from Gatesville, Texas. He gained his first roles in Europe at Klagenfurt, Braunschweig, Mannheim and Bern. He made his Vienna Opera debut in January 1967 as Conte d’Almaviva in the Barber of Seville and went on to sing 30 roles over 203 performances.

In the US, he sang with Santa Fe Opera, San Diego, Dallas and Houston.

Martha Argerich appeals to Swiss to save doomed music school »