The mezzo who became a tenor: ‘Glyndebourne was a safe space for singers’

An American transgender singer who was accepted into the Glyndebourne Academy describes the difference a sympathetic environment can make.

The official student profile was this: “Glyndebourne Academy is for those young classical singers (16- 26) who have missed out on the chance to develop their vocal talent through lack of access to specialist knowledge, funds, or who have faced some other barrier which has prevented them reaching their full potential.”

Glyndebourne was creating a safe space for singers to accept their flaws or inadequacies, and to work on them without judgement, and to give them a real chance to make up for lost time due to finances, illness, disability – or in my case, the two years lost while taking testosterone.

From the very first audition, I felt supported and loved by the Glyndebourne Education team. During our auditions, they sat me down to ask me questions about my situation, and really listened to what I had to say. It gave me an incredible sense of validation that I didn’t know I had been looking for: you are a good artist, you are worth the time and effort, we want to listen to what you want to communicate…. 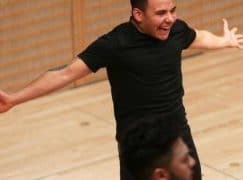 CAVEAT: This looks like a piece of Glyndebourne PR planted on an ex-newspaper that no longer pays for articles. It is, none the less, interesting.