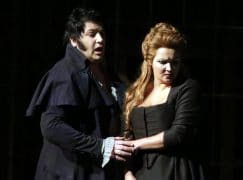 Opera takes a back seat on La Scala’s opening night

From my front seat at La Scala:

The annual carnival that dances round La Scala’s opening night on December 7 has very little to do with the art of opera. The date was fixed by Saint Ambrose, 4th-century bishop of Milan, and it is a public holiday so the general populace either heads for the ski slopes or mills around waiting to see if anything is going to happen on the giant screen in the Galleria Vittorio Emanuele.

Getting to the opera house is a bit of an ordeal. An anti-capitalist demonstration blocks half of the piazza under the slogan People Before Profit. Fireworks burst in the air. Hundreds of police maintain a 100-metre security cordon around La Scala, demanding to see tickets and identity before they let me through. The main doors are choked with paparazzi, snapping away like toy dogs at anyone who wears an air of celebrity. Superannuated journalists jabber non-stop on live television, accentuating the artifice of existential hypertension.

Inside, a tall woman in a mink-and-satin cape displaying the 1900 Tosca playbill vies for attention with the likes of Donatella Versace and a few dead-eyed blondes who look as if they have turned up with a bald hedge-funder in tow from one of Silvio Berlusconi’s bunga-bunga parties. A soprano, Silvia Colombini, walks around with ‘Rinassi della dignita’ (rebirth of dignity) inscribed in pink lipstick on her chest. Dignity is not the first noun that sprang to my mind. 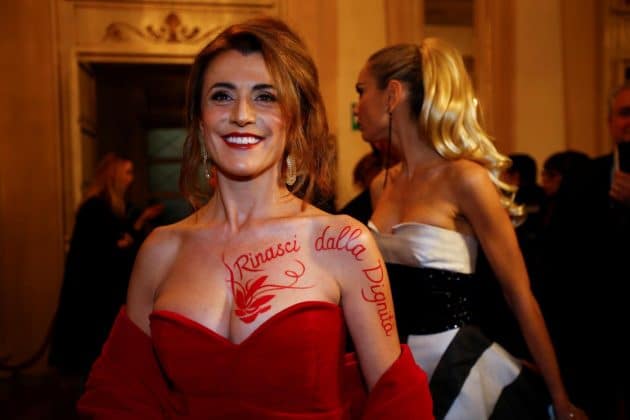 All this and opera, too, and with high stakes to play for. Riccardo Chailly, the music director, has discarded the big guns – Rossini, Verdi, Puccini – in favour of a pistoletto that has never won a firm foothold in the repertoire. Umberto Giordano’s Andrea Chenier stands or falls on the calibre of its tenor. Pertile, Gigli, Del Monaco and Corelli once owned the title role. But between Corelli in 1960 and José Carreras in 1982 the work was not staged here at all and it then vanished once more for the next 32 years. Chailly himself conducted the last Scala performance in July 1985.

He has brought it back both as a matter of personal conviction and as a launchpad for Yusif Eyvazov, an Azerbaijan tenor famed for his marriage to the Russian diva, Anna Netrebko. Eyvazov has never sung before at La Scala. Netrebko is here to support him in the heartbreak role of Madeleine de Coigny, an aristocrat who goes to the guillotine, unable to live without her poet, Chenier. There is more than one head on the block in the already sulphurous atmosphere of a Scala opening night.

First blood goes to the baritone. Luca Salsi is formidable as the rebellious major-domo Carlo Gerard who wrecks the nobility’s party with a rant against oppression. Beside him, the poet Chenier looks undernourished, as poets should. Eyvazov, in long sideburns and a high collar, could pass for Elvis Presley, just out of the army, still to regain his swagger. In the tug for Netrebko’s love, Salsi appears the more credible contender on stage. Eyvazov lacks enough physical authority until the heart-rending march to the scaffold. As for Netrebko, she is immaculate as ever, her voice deepening gracefully to lower, darker registers. A suspicion dawns that she has been slightly down-staged in Mario Martone’s traditional production to give Eyvazov his best chance to shine.

Happily, there is no need to craft a review when an independent measure exists to assess operatic merits. The distinguished newspaper Corriere della Sera has taken to giving Scala artists the same marks out of ten as it does for the footballers of Inter Milan. In its first-night ranking, Chailly scored a 9 for his ‘profound analysis and forceful communication’, Netrebko and Eyvazov scored 8 each and Salsi came up short with 7.5. Eleven minutes of applause was adjudged a triumph. Eleven million Italians watched at least a few minutes of the opera on Rai-uno. Against such numerical verdicts, criticism is redundant and context is all that remains to discuss.

Chailly, at the end of his first year as music director, has changed the pecking order at La Scala. The chorus and orchestra were the true stars of Andrea Chenier, exemplifying the horror of mob rule with a gloss of refined, all-too-persuasive logic. Principal cello Sandro Laffranchini should have received a curtain call all to himself for four exquisite solos. In the past La Scala was a domain for divas set inside a bear-pit. These days, the company has raised its game in every department.

I heard mutterings about Chenier being unworthy of a night when Italy expects a masterpiece. There is some justice to the claim. At just over two hours, Chenier is a stand-up espresso. The score, apart from five big arias, is humdrum and the libretto – by Luigi Illica who, the same year, wrote La Bohème for Puccini – has all the literary finesse of Google Translate.

Still, Chailly is right to stick to his pistols and keep challenging expectations. The success or failure of one tenor or another is irrelevant to the survival of opera. The quality of La Scala’s performance is, however, quintessential. Chailly, who spent his teens in the house when his father was artistic director, grasps that priority better than any living maestro. Fashionistas may come and go on opening night. La Scala is forever.

« What Tosca lands in at the Met