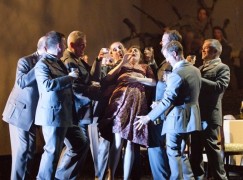 Opera is ‘a breeding ground for sexual bad behavior’

The US mezzo-soprano Cindy Sadler has published an important, extensive and far from comprehensive catalogue of commonplace abuses in classical music and opera.

Two years ago, Cindy collected testimonies of sexual harassment and assault for a report to AGMA, the American Guild of Musical Artists. It is not clear whether the report was ever published, but certainly nothing changed – as evidenced by the spate of allegations about James Levine and sundry others..

Some of the stories she recounts are chilling in their sheer familiarity.

‘My anger, even to this day when I think about it, never really centered on him. It was my colleagues and the staff that made me both livid and hurt. I couldn’t believe no one in the room said anything or helped me. I was surrounded by people but completely alone. Everyone knew it was wrong. There were at least six other people in the rehearsal besides the two of us, and no one said a thing.

‘I never reported him. It seemed obvious that this was just how he behaved, and everyone knew it. He was a big star, and I was just another young soprano.’

« Report: One third of Simon Bolivar orchestra has gone into exile