A music professor and conductor named in the Boston Globe allegations of sexual misconduct at music colleges has lost his positions at three schools.

Eric Hewitt has left the Boston Conservatory and Boston College High School and is on leave from Phillips Exeter Academy.

According to the Globe, four former Boston Conservatory students accused Hewitt of sending them unwanted text messages, making rude phone calls, bullying them and sexually assaulting one of them.

Hewitt is a protégé of the late composer Gunther Schuller. 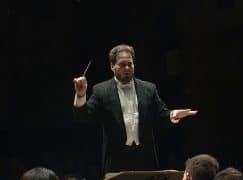