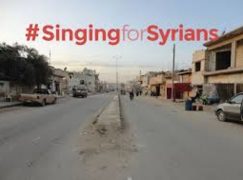 Rush-hour commuters at London’s Marylebone Station were faced last night by a pop-up Messiah, organised by the conductor Nicolas Cleobury.

Some of the singers are well-known pros.

The fund-raiser is in aid of Singing for Syrians, helping to get medical aid to victims of a brutal war.

All money raised goes directly to projects helping Syrians inside Syria (where possible), including paying doctors’ wages in rural southern Aleppo, running a kindergarten in Idleb and funding a number of prosthetic limb clinics. It is estimated that over 30,000 Syrians, children and adults, are amputees in need of urgent treatment. A prosthetic limb below the knee costs just £270 to fit, restoring dignity, independence and the ability to work.
Our aim is sustainability, which is why we focus on funding salaries and long-term work in health and education. We specifically choose projects that have the maximum impact for those in need, and monitor them regularly.