The London Symphony Orchestra has finally filled the vacancy left by the death of Rod Franks in 2014.

The new co-principal trumpet is David Elton, who has held the seat at the Sydney Symphony for the past six years Before that he was in Perth and Adelaide. He has also appeared with several world orchestras, including the New York Philharmonic. 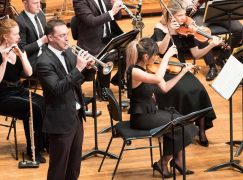