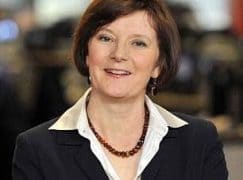 Ex-BBC boss is named in plan to cut Irish orchestras

The former head of BBC Radio, Helen Boaden, has been named in the Dail, the Irish Parliament, as an adviser who has been engaged by RTÉ to help it merge two orchestras into one.

RTÉ has announced an ‘independent review’ of its orchestras to be carried out by Boaden and a consultancy called Mediatique.

Labour TD Joan Burton said: ‘The symphony and concert orchestras, founded in 1948, are an intrinsic part of our culture… Are we just on the road almost to a plot you might see in an opera, where music and particularly classical and orchestral music in RTÉ, is going to be killed by death by a thousand cuts?’

« Now Yuja Wang comes out in her undies

Confessions of a piano competition judge »