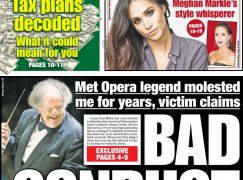 The Ravinia Festival said it had ‘severed all ties’, with Levine, its recently appointed conductor laureate. ‘We are deeply troubled and saddened by the allegations and sympathise with everyone who has been hurt,’ it said.

The Cincinnati May Festival has cancelled the appearance of James Levine next May.

The Cleveland Orchestra said: ‘We are not aware of any complaints made during his time with the orchestra.’

Verdict: French conductor is convicted of ‘abusing weakness’ of an elderly singer »