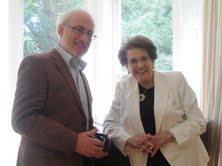 An honour at last for Lilian Hochhauser

The impresaria Lilian Hochhauser has been awarded a CBE in the New Year’s Honours List, belated recognition for almost 70 years of music making in the UK.

Lilian, who is 91, together with her husband Victor, imported the foremost Russian artists from the mid-1950s. They also pioneered inexpensive and unsubsidised family concerts at the Royal Albert Hall. In recent years, she has been presenting summer seasons of the Mariinsky and Bolshoi ballets at Covent Garden.

Among other honours, there is a knighthood for the Beatle Ringo Starr; a Companion of Honour for arts presenter Melvyn Bragg; a CBE for Jonathan Freeman-Attwood, principal of the Royal Academy of Music; OBEs for Sarah Alexander, head of the National Youth Orchestra and Guildhall professor John Sloboda; and MBEs for the violinist Anthony Marwood, for David Temple, director of Crouch End Festival Chorus.