An early Slipped Disc star is dead at 27

Walking down Abbey Road one summer’s morning in 2011, I found the the studios besieged by a thousand teenaged girls in scenes unseen since the Beatles.

Back at my desk I shared this pop phenomenon – a South Korean band called SHINee – on Slipped Disc. Withing an hour, the site surged with new readers.

It is with great sadness that I learn that Kim Jonghyun, the group’s lead singer, was found dead today in his apartment in the Gangnam district of Seoul. He had reportedly been suffering from depression.

May his soul rest in peace. 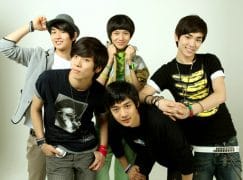