The jury was chaired by past winner Gianandrea Noseda. The runner-up was Felix Mildenberger, a German. 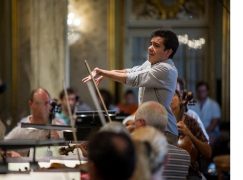