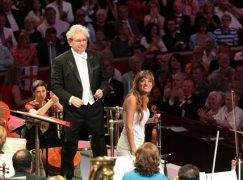 A parting gift from Jiri Belohlavek

Among the major losses of 2017, the death of Jiri Belohlavek hit particularly hard.

Jiri was a conductor of deep reserve, never showy, intensely private. He was elected chief conductor of the Czech Philharmonic in Communist times, overwhelmingly re-elected after liberation and then unceremoniously dumped by the players a year later in favour of a German conductor who promised a bigger record deal.

It says much for Jiri’s loyalty and humility that he returned to the Czech Phil when it was in trouble in 2012 and served as chief conductor until his death of cancer on May 31, aged 71.

Jiri was the exact contemporary and schoolmate of my dear friend Tatiana, who died six months earlier. The two losses are inextricable in my mind.

I am listening at this moment to a glistening 2014 performance of Smetana’s Ma Vlast that Decca will rush-release next week. Tears are hard to restrain.