A cellist who is taking her time

Laura Van Der Heijden won the BBC Young Musician contest in 2012, when she was 15. 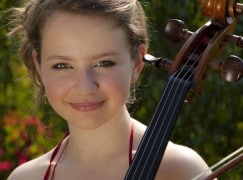 Two of her successors – Martin James Bartlett and Sheku Kanneh-Mason – have since leap-frogged Laura to a record contract. But what was always apparent about Laura was that she did things her own way, in her own time.

Now 20, she has a debut record coming out next month on the Champs Hill label.

Titled 1948, it presents Russian works for cello and piano that were composed in or around the fateful year when Stalin launched his second assault on composers.

Not the average launch-pad for a new artist.

Not the average artist.