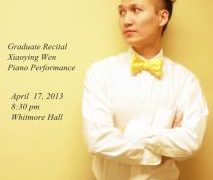 It is with deep pain and sadness that I separate from Xiaoying Wen, my student, friend, colleague and a gifted artist. Xiaoying was taken away from us on November 16, 2017. He was hit by a pick-up truck while riding his bicycle at a crosswalk. He was pronounced dead at the hospital’s ICU a few hours later. Xiaoying was only twenty-eight years old and had a bright future ahead. A life cut short. A senseless death.

While being one of the most talented people I have ever encountered, Xiaoying was also very humble. He was a bright light among us and embraced life to the fullest. Anyone who knew Xiaoying could see his gentle soul, and his playfulness. He was really wonderful with children including my Zohar. He had a special generosity about him, a true kindness and a positive spirit.

Xiaoying was so devoted and passionate about his music and art. In recent years, Xiaoying developed a special affinity to Scriabin’s music. I gave him his first Scriabin’s piece, the Vers La Flamme and he soon developed a passion for the music in all of its eccentricities and the uniqueness of its colors. Perhaps it was the real fire in the music, that sensuous spark that is so rooted in it, that he so easily related to. I have never heard better climactic moments than in Xiaoying’s performances. Soon after, he tackled the 5th sonata and played it with such exquisite sensitivity and strong personal verve. He gave fantastic performance of it at Schlern festival 2016 and at his second DMA recital last March. The 10th sonata was his next project and he already memorized it quickly for his next recital together with Medtner’s fairy tales, and the Barber sonata. I was so looking forward to his next recital. His ecstatic and triumphant Vers La Flamme will stay with me forever.

The slide show I created following Xiaoying’s passing is celebrating his life. I gathered it with the help of many of our students at ASU who sent me photos and quotes about him. He was so loved and admired by everyone and he loved back.

I miss you dear friend. Farewell Xiaoying. You are in my heart forever!

« Death of a much-recorded principal clarinet, 95