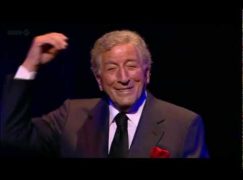 Tony Bennett pledges to ‘do something for Trump’

During the election campaign, he sang for Hillary.

During the election run-up, Bennett performed at fundraisers for Hillary Clinton.

Before the show, Bennett told reporters, “Washington is the greatest city in the greatest country in the world.” And to those who don’t care for the current Administration? “Well that’s their problem,” he answered, noting he knows the current President “very well,” and a performance for Donald Trump is likely. “Sooner or later I’ll probably be doing something for him,” he said.